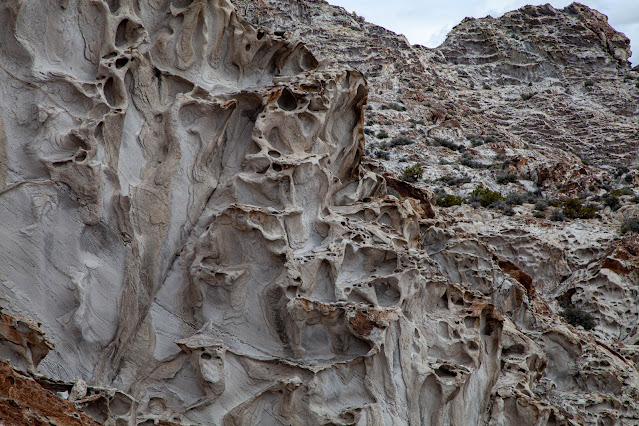 The holes in these rocks are called tafoni. Here is an explanation of them from the Wikipedia: Tafoni.

Tafoni often occur in groups that can riddle a hillside, cliff, or other rock formation. They typically develop in siliceous, either coarse-grained (sandstone) or coarsely crystalline (granite) rock types. They also have been observed in lacustrine silts, tuffs, and conglomerates. They can be found in all climate types, but are most prolific in salt-rich environments, such as deserts and coastal zones. They have been found across the Earth, with dramatic forms found in the Jodhpur-Ajmer section of India’s Thar Desert, Petra, Jordan, Coastal California and Australia, and even in the Arctic regions, and Antarctica. The common factors in the environments in which they are found are high salt concentrations and frequent or occasional desiccating conditions.

These rocks are in a small mountain range in the West Desert of Utah called the Honeycomb Hills.