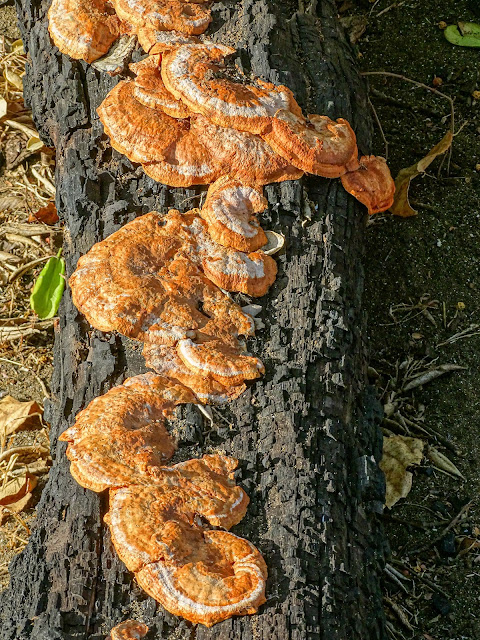 As I travel around the world, I am always surprised to find things that are familiar and remind me of home. I have always been fascinated by shelf fungi. Here is a short explanation of this interesting fungus from Wikipedia: Polypore.

Polypores are a group of fungi that form large fruiting bodies with pores or tubes on the underside (see Delimitation for exceptions). They are a morphological group of basidiomycetes-like gilled mushrooms and hydnoid fungi, and not all polypores are closely related to each other. Polypores are also called bracket fungi or shelf fungi, and they characteristically produce woody, shelf- or bracket-shaped or occasionally circular fruiting bodies that are called conks.

Most polypores inhabit tree trunks or branches consuming the wood, but some soil-inhabiting species form mycorrhiza with trees. Polypores and the related corticioid fungi are the most important agents of wood decay, playing a very significant role in nutrient cycling and carbon dioxide production of forest ecosystems.

Over one thousand polypore species have been described to science, but a large part of the diversity is still unknown even in relatively well-studied temperate areas. Polypores are much more diverse in old natural forests with abundant dead wood than in younger managed forests or plantations. Consequently, a number of species have declined drastically and are under threat of extinction due to logging and deforestation.